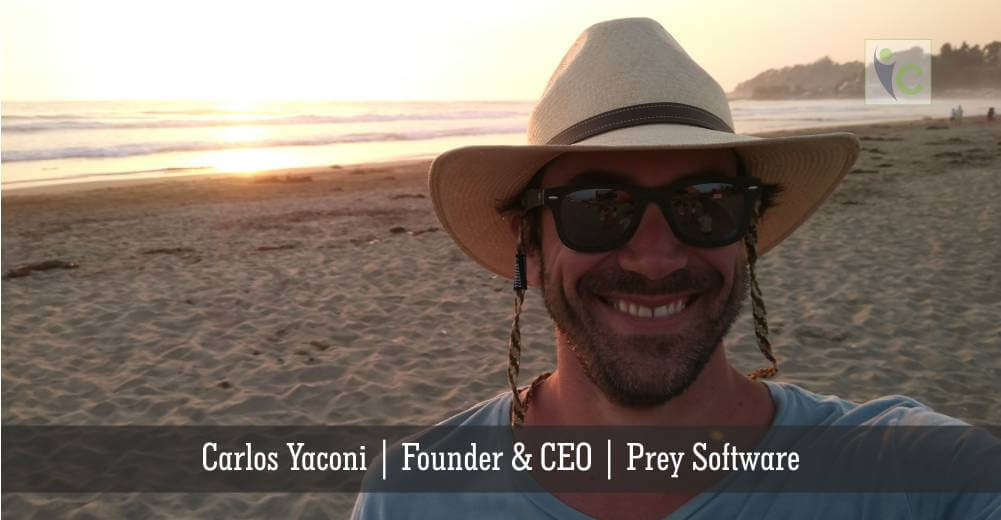 The development of technology is leading to more and more devices to be connected to the internet; data is becoming the new oil for both the developed and developing nations. However, this has given rise to the threat of data breach, loss, and misuse, which have become an alarming issue in today’s scenario. This is especially true for medical data, which is increasingly stored on mobile and connected devices, becoming vulnerable to theft or misplacement. Even with the industry in constant development, IT security in healthcare suffers from outdated regulations that set security standards far below the threat line.

To counter this issue emerged a company, Prey Software. It specializes in providing a software platform that secures and manages mobile devices like laptops, phones, and tablets against theft, loss, and data misplacement.

Prey wants its users to have all the necessary tools to stop fearing theft, and to prevent the chance of devices getting lost or stolen in the first place. The company wants to turn that problem into an opportunity for organizations and users to stand up against theft or loss of critical devices and regain control over their data.

It integrates all devices independently and irrespective of their operating system, and centralizes them under an online panel that serves as a remote control room. From there, the administrator can operate Prey’s functionality, triggered by Prey’s installed agent to monitor a mobile device fleet’s position, organize into labeled groups, and passively monitor devices utilizing its Control Zones geofencing tool to detect movement, if the devices leave a designated area such as a hospital lab, building, or campus.

In case of theft or loss of a device, the administrator will be ready to react to the event and secure the data located on a lost device remotely, locking it down and eventually retrieving it. As for the asset itself, Prey’s tracking, or ‘MISSING mode’ will generate reports with pictures, location, nearby Wi-Fi networks, hardware changes, and a wealth of actionable data that empowers police to take immediate action to retrieve the mobile device.

Prey provides a thorough solution with a steadfast focus upon anti-theft and data loss prevention. Health and educational organizations interact with extremely sensitive data regularly and require a solution that, aside from general management, ensures that there is a barrier against all the worst cases. This is why Prey focuses on protecting the data, locking it, or eliminating it if necessary.

The company makes it easy to retrieve a misplaced device, or stolen devices. It initiates proper device recovery and identification of the perpetrator through comprehensive evidence reports.

The organization’s initial success has created a strong base of trust. Prey Software, being a part of an industry that deals with extremely sensitive issues, focuses on transparency and open development that has proven to give its users the peace of mind they need.

A Leader with a Revolutionary Thought Process

Prey was born in 2009 when Carlos Yaconi, who is the current CEO of the organization, joined forces with Tomás Pollak, the initial founder of the Linux application. Together they created the first global tracking and anti-theft application for mobile devices. Prey Anti-theft, the brain child of Carlos, grew from an initial single-platform solution into today’s comprehensive multi-O/S and multi-device tool; which aids businesses and consumers to protect nearly all devices, regardless of the operating system or device manufacturer. It is a one-stop solution, which secures and manages all of a company’s various mobile devices.

The key to this continued expansion of Prey is the by-product of the flexible environment Carlos created within the company, welcoming methodology changes, according to the team’s needs or the evolving needs of customer organizations. This open approach came from Carlos’ past experience as an entrepreneur leading two software and service provider companies named Nectia and Bizware that are still active today, as well as his background as a Computer Science and Information Technology graduate.

Carlos is a firm believer in the power of open-source community and solutions, and in 2012, this led Prey to become part of the global Endeavor program, an initiative that connects entrepreneurs all around the world to promote and generate change.

By offering an exceptional service and protection against theft, Prey has been granted the Presidential Award for Innovation in Chile and it is the first public anti-theft solution available for mobile devices worldwide. The company has led to the development of an entire industry with the basic goal to provide anti-theft solutions, which gave a thrust to various similar platforms like ‘Find my iPhone’ by Apple. Today, Prey is protecting more than 8 million devices!

Carlos asserts, “Office culture plays a huge role in the company”. Prey believes in open spaces and comfortable environments, with flexible positions, games, and isolated spots for anyone in the company to work. “We’re a small group of people so we must ensure all relationships develop smoothly, tackling any issues up front with open discussions”, adds Carlos.

Prey has applied a unique horizontal methodology to the company’s business approach. In a nutshell, Prey employees bring their talents to participate as a whole, independently of the area or position they work in. Speaking of the dynamic workspace, Carlos says, “Projects and ideas are approached in collaboration, welcoming new ideas and encouraging feedback from every employee, no matter what their defined role is.”

A Strong Leap into the Future

The company is continuously looking to tackle new security opportunities, from the development of improved anti-theft and multi-device management capabilities, to reaching new frontiers that suffer from the same problems and security challenges. Prey Software works hard to stay up-to-date with its user’s requirements and help them with more thorough solutions that add additional barriers to block threats, such as the development of remote encryption.

The following years will see Prey expanding to help secure new formats from theft and to simplify the management & control of devices and data in an increasingly mobile world.