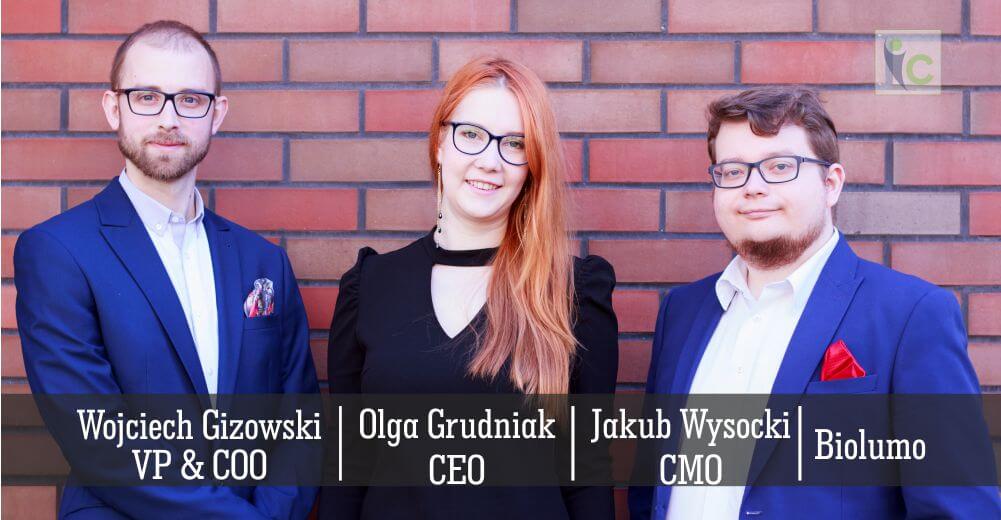 Antibiotic resistance is a major problem faced by the healthcare industry today. It has cost a lot of monetary resources as well as a lot of companies have invested their time in finding a solution to this. Biolumo, an innovative and growing company based in Gdynia, Poland, was also set on the same quest. It faced a question from its mentor and business advisor, “Can you point any solution that will make me sure my son got the right antibiotics prescribed?” This question lighted a spark in the company’s team; a spark that started the fire called Biolumo. Today, the company is focused on developing a set of tools for fast and inexpensive antibiotic resistance detection.

The Fuel to its Success

No one person can achieve true science and business success alone, believes Biolumo. It believes in working as a team and with partners. The roles in the company reflect the responsibilities and skillset, not hierarchy. Biolumo has an amazing team starting with its Chief Science Officer, Marcin Pitek, who came with the idea. Olga Grudniak is the CEO, who combines science and business together. She is very recognized, young businesswoman. Wojciech Giżowski, the COO, is an expert on building both relations and products. He is responsible for the most partnerships and mentors that keep the company going. Jakub Wysocki keeps Biolumo on the lips of both media and investors. All of them have played important roles in the company’s success.

Post Biolumo’s inception, the first months were devoted to testing its initial idea to identify antibiotics resistance in the patients’ samples. Since then, Biolumo has evolved this method and designed fully automated prototype that can be used by every nurse.

It has participated in one of the best acceleration program in the world – Startupbootcamp Digital Health, which helped Biolumo in planning its international growth strategy. In Poland, the company’s country of origin, it has managed to partner up with the biggest healthcare companies on the market.

“Our mission, even before the Biolumo conception, was to fight antibiotics resistance the best we can,” says Olga. The want to give scientists time to develop a sustainable successor for traditional antibiotics was the goal of Biolumo’s science team, this also included boosting effectiveness of diagnostics amongst the group that prescribes the most antibiotics, General Practitioners.

Biolumo’s flagship product is a fast, point-of-care antibiotics selection device for general practitioners and clinics. The company is offering diagnostic effectiveness on antibiogram level, by delivering results eight times faster. Furthermore, its solution is automated and therefore, easy to use. It can also provide a new revenue stream for clinics.

This product is a brilliant combination of biotechnology, hardware, and software. The company has used modern technology instead of XX century method, which allowed it to identify antibiotics resistance much faster. With Biolumo’s ingenious product, a laboratory, trained specialists, or the transporting sample are not needed to reach the results and that minimizes the costs further.

The company’s interdisciplinary approach and its focus on finding the best combination of these disciplines is the key factor leading it towards success.

For its remarkable contribution, Biolumo has been recognized by many national and international organizations highly regarded amongst the healthcare society. One of the biggest distinctions Biolumo has been honoured with was being listed at prestigious Global Digital Health 100 ranking by The Journal of mHealth. It has also been awarded the title – The Healthcare Leader during The XXIII International Open Healthcare Congress by the healthcare key opinion leaders in its region, in January 2018. Biolumo won the 2nd place at infoShare 2018 Startup Contest, the competition that takes place during the biggest startup conference in the CEE region. Furthermore, at the beginning of 2019, its CEO, Olga Grudniak, has been named The Best Entrepreneur in 25 Under 25 by Forbes and The Businesswoman of the Year in Poland.

Biolumo is working hard to roll out its device, as soon as possible. “We want to give scientists the time to develop a sustainable successor for traditional antibiotics – our science team included – by boosting effectiveness of diagnostics,” says Wojciech. After that, it has developed plans for the next features and upgrades in its product. Speaking about the future endeavors, businesswise, Wojciech sserts, “We are working on strategies for international lunch of our device. To get the effects we hope to achieve, we need to provide our solution worldwide, not only in our region.” Simultaneously, the company is continually working on the next generation antibiotic that should be a long-term solution for the problem, which may take some time and resources as developing any new drug does.