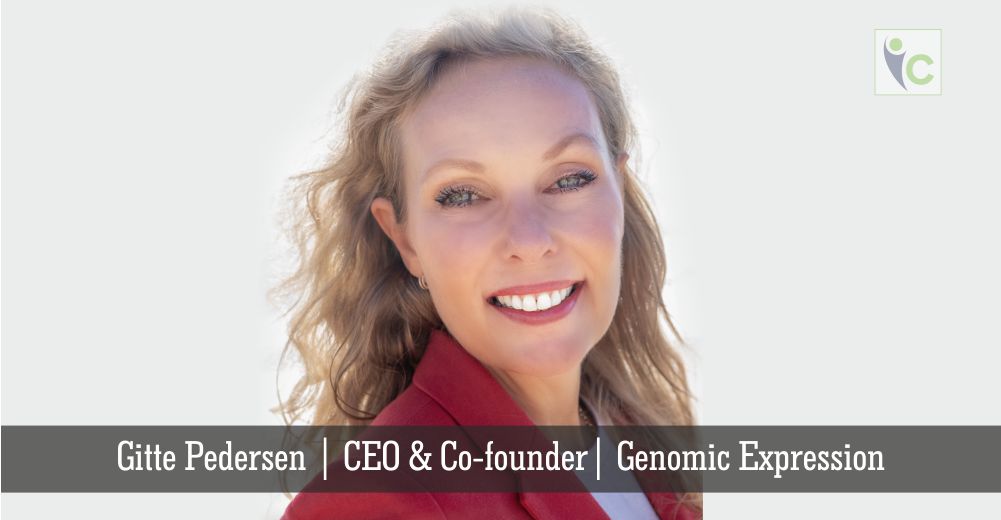 Headquartered in Beverly, MA, and founded in 2012, Genomic Expression is a prominent organization that sequences RNA to identify the best drug for the patient and the best patient for the drug. The company is spearheading with a vision to revolutionize healthcare by truly individualizing it, which in oncology means selection of effective treatments that either cure cancer or at least make it chronic and not a death sentence.

The company was established by Gitte Pedersen, the CEO and Co-founder, and her brother Morten Pedersen, after their mother was diagnosed with cancer. Gitte and Morten both are scientists and they knew that the diagnosis was a death sentence if they followed the standard of care guidelines. As a result, they searched for a better drug in clinical development. However, in order to figure out which clinical trial could potentially benefit their mother, they needed to better understand the tumor’s genetic profile. For that, they looked for a tool that could do the analysis on a large scale and such a tool did not exist. This gave them a kick-start to incept Genomic Expressions.

Today, the company has top placements in Women’s Founders Network, XTC (Richard Branson), Molecular Tri-Conference, Red Herring, and MedTech Innovator. It has also been felicitated with the ‘Lyfebulb-Helsinn Award’, ‘EIC Life Science Award’, and ‘EUTop50’, and Gitte has presented at the European commission as well as at the United Nations.

A Journey that Brought Innovation

Genomic Expression was started with a large grant from the Danish Government as the diagnostic partner of “Genome Denmark”. Gitte and Morten then leveraged that success to raise its first round. With just a patent and an idea in hand at that time, the team travelled over the “valley of death” by raising grant money. Today, the company has 4 fully funded clinical programs validating its platform – OneRNA™, in four different cancer types with a strong focus on women’s cancer first – all funded by grants.

Genomic Expression could achieve this level of backing because of its ground breaking data. ”We identify markers for a handful of already approved drugs in 100% of the patients by sequencing RNA instead of DNA. This is true in any cancer type. In a world where only 1 out of 4 cancer treatments actually prolongs life, we believe we can greatly improve outcome and reduce recurrence, and that is what we want to prove in these clinical programs,” asserts Gitte.

She further continues saying,” We also believe that treating patients with drugs that actually work as a first line of treatment will decrease cost of care, since managing the side effects for some of the more toxic drugs are expensive, and cost of losing mothers and fathers is significant cost to the society.”

OneRNA™: A Unique Flagship Product of the company

Genomic Expression’s OneRNA™ sequencing platform enables a paradigm shift from ONE disease, ONE marker, ONE drug to ONE patient, MANY markers, MULTIPLE treatment options that go beyond drugs by sequencing RNA and linking data to treatments.

OneRNA™ is positioned to disrupt the current standard of care paradigm which only prolongs life for 1 out of 4 patients in oncology, while we are spending $100 billion on drugs and 8 million patients die. Using the existing drugs as the toolbox, the company believes that it can prolong life for most patients and in contrast to drugs, clinical approvals can be obtained in less than 12 month. Thus, this paradigm shift is a breakthrough because it can select the best drug for the patients’ real-time problems. For an instance, new drugs get approved or enter into clinical trials all the time and if there is a match between the tumor and this new drug, information can be pushed to the patient’s doctor.

Besides, OneRNA™ is a platform that integrates workflow from RNA extraction in FFPE samples, proprietary RNA-seq library generation, using Illumina sequencing and proprietary algorithms to analyze the data and several proprietary databases. It enables the identification of aberrantly expressed genes through to the clinical interpretation. This platform is exponentially scalable and can be moved into other indication with an update to the clinical database. The development of this platform has been enabled by Next Generation Sequencing and AI/Big data analytics.

Until now, the company has raised +$6.5M in grants to validate OneRNA™ in 4 types of cancers, from the Danish Innovasion Fund, EuroStars, and Horizon2020.

The true award for any company is its happy clients. Genomic Expression has received numerous positive feedbacks from its satisfactory clients.

“Being able to identify responders and non-responders to novel treatments by analyzing blood in combination with the OneRNA™ platform has the potential to further improve care and reduce cost. Being able to substitute a highly invasive and expensive biopsy with a blood-based biomarker assay is not only beneficial for the patient, but also potentially able to reduce cost of care.”- Dr Jonathan Hernandez, The NCI

Genomic Expression would be launching OneRNA™ this year while its mission is to get the test into standard of care in women cancer first. The company has at least three data packages that are being published over the next couple of years. The company is planning to expand internationally and wishes to address all cancer indications where there is an unmet need, through partnerships and also by raising additional capital.

The company can also move into other indications, such as autoimmune inflammatory diseases and all the way to health monitoring and would be focusing more on revolutionizing the healthcare system.