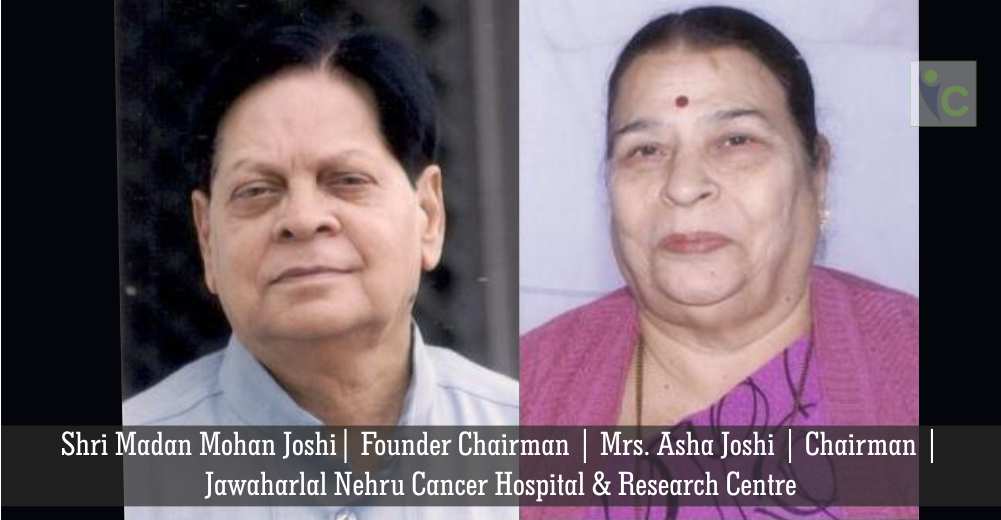 Cancer has long been dreaded as a “death warrant”. Its shadows always have a chastening effect on the frayed human mind and nerves. To bring succor to those afflicted with the dreaded disease is a divine service.

Modern medical science, though still struggling to find a permanent cure, has opened new vistas of treatment and it has now been established that early detection can and does ensure a very high degree of cure. Even at late stage, quality of life could be improved through proper application of holistic treatment.

Situated on the famous Idgah Hills, Jawaharlal Nehru Cancer Hospital & Research Centre provides complete diagnostic and therapeutic facilities of all cancers through all the modalities such as Radiotherapy, Onco-surgery, Chemotherapy (Medical Oncology), Anaesthesiology, Nuclear Medicine, Radio-diagnosis & Imaging, Pathology, Blood Bank, Microbiology, Palliative Care and Community Oncology. All facilities are available under one roof. Besides these specialities, the hospital also has a comprehensive Research Department with Animal Lab facility.

The genesis of this cancer institute lies in the world’s worst industrial disaster the Bhopal gas tragedy, which left a trial of death and devastation – quite a few thousand dead and tens of thousands maimed, disabled and emaciated for life – following the leakage of huge quantities of Methylisocyanite (MIC) gas from the Union Carbide’s pesticide plant on a cold wintry morning of December 3, 1984. Medical experts were almost unanimous in their view that the long term effects of this toxic gas would push up the graph of cancer incidence considerably. These warnings obviously added a sense of urgency to the long felt need of a comprehensive cancer hospital in Bhopal, one of the fastest developing towns in India.

Shri MadanMohan Joshi, a renowned journalist and editor of the eminent newspaper ‘Nai Duniya Bhopal’ took an initiative to develop a facility for cancer treatment in Central India. He motivated and inspired likeminded people to get associated for developing such a facility for noble cause of Cancer treatment and formed a Society viz. M.P. Cancer Chikitsa Evam Seva Samiti. He has sown the seed for such a venture in the year 1989 and the efforts came out in the form of full-fledged facility. His efforts generated tremendous support of enlightened sections of the society and government for achieving this objective in the beautiful lake city in a time bound manner. These efforts provided much needed relief to the people when the hospital was inaugurated on 11th January, 1995, by the erstwhile President, Shri Shankar Dayal Sharma, with 100 beds.

Nothing is however more challenging in medical field than establishing a comprehensive cancer hospital, as it requires massive investment. Few, therefore, take up this extraordinary challenge. Shri Madan Mohan Joshi was one of them.

With competent and dedicated staff and dynamic leadership provided by Founder Chairman, Shri Madan Mohan Joshi, state-of-the-art cancer cure and care modalities and strong infrastructure for research, the institute has already become the favoured destination for the treatment of this dreaded disease in Madhya Pradesh and its catchment areas are expanding day-by-day covering a vast area even outside the state.

However, we are conscious of the fact that there is always scope for improvement and a lot has yet to be done in view of the opening of new and newer frontiers of medical knowledge and updating of various disciplines.

It is a matter of great satisfaction that a significant number of patients who received treatment at this hospital are completely cured and living cancer-free life. A good number of patients reporting at advanced stages have also been considerably benefited by the treatment and have shown remarkable improvement. Several terminally ill patients got considerable relief from pain as a result of proper application of palliative care, a newly emerged holistic modality in the treatment of cancer.

While awareness about other diseases is spreading rather rapidly, awareness vis-a-vis cancer is unfortunately still moving at a snail’s pace. The result, therefore, is disastrous. People of all ages, sex and section report-in for the treatment of this disease quite late. Even doctors, intellectuals and similar enlightened groups are no exception. The situation is worse in Madhya Pradesh because of extreme backwardness and ignorance resulting in total indifference towards growing scourge of cancer. Jawaharlal Nehru Cancer Hospital & Research Centre has, therefore, given special attention to cover more and more areas under our cancer awareness program. Free cancer detection camps and meetings are organized regularly both in urban and rural areas for early detection and for inculcating awareness about various aspects of the disease including its symptoms.