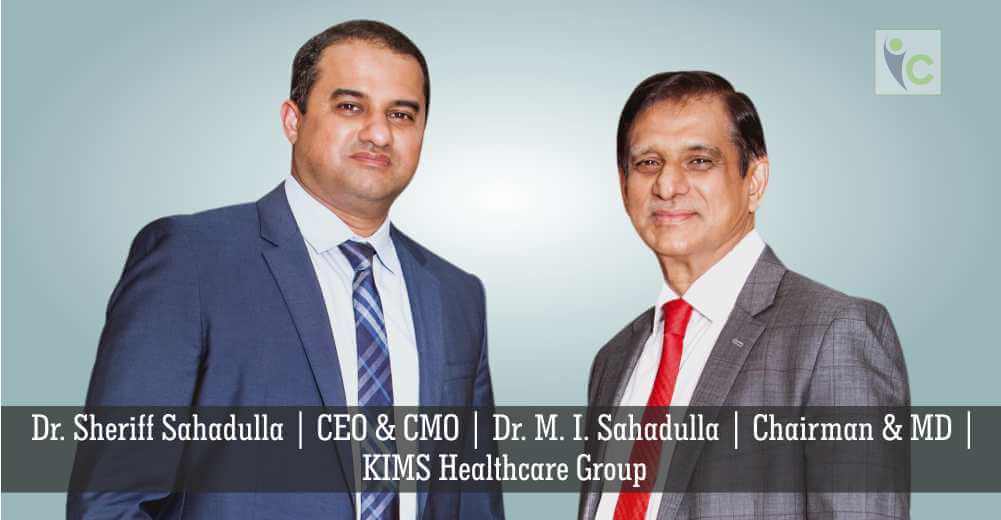 Established in 2002, with a noble vision to provide quality healthcare with affordability and accessibility, KIMS Healthcare Groupis the largest healthcare network in the state of Keralaand is among the top leading hospitals in the country.

Ever since its establishment, KIMS has developed into one of the leading centres of pioneering medical work, research, and academics in South India with a global outreach. It has also been instrumental in revolutionizing the art of healthcare delivery through its quality focused systems and practices. KIMS brings a dedicated team of medical professionals, cutting-edge facilities, world class treatment protocols to deliver quality care balancing the high expectations of patients and the increasing cost of medical technology.

The academic wing of KIMS has been recognised as one of the leading academic centres in healthcare. Academic endeavours have been an integral part of its persistent pursuit for excellence. The academic wing upholds this tradition through specially planned courses for under graduates and post graduates across 21 specialties, nursing and paramedics. The exposure and experience achieved under training allows students to become familiar with international systems and policies.

Over the decade, the KIMS Healthcare Group has distinctly spread over two geographies i.e. India and the GCC region. The group has a total of 18 institutions comprising hospitals and medical centres spread over Kerala and Andhra Pradesh in India. In the GCC region, it spans over Bahrain, Oman, Saudi Arabia, Qatar, and United Arab Emirates. The group also operates Airport Clinics at the new Muscat International Airport.

The group has combined bed strength of around 2,000 with over 75 per cent occupancy throughout the year. It employs over 900 doctors and 2,000 nursing and allied health staff, who consultant and care for around 6,000 outpatients per day. All of KIMS’ institutions in India and GCC region are equipped with the best IT support systems. Its hospital management systems ensure that all patients’ medical records are electronically maintained.

There have been a few important factors in the growth of cardiology treatment in India. International patients flock to India for various types of heart diseases treatment due to affordable cost and high medical standards, comparable to the best medical facilities in the West. Also, most of the hospitals in India possess international quality accreditations such as – The Australian Council on Healthcare Standards International (ACHSI) or Joint Commission International (JCI), which become an added point for consideration. In every field of cardiology and cardiac surgery, there has been notable progress in the last few years. There has also been a significant advancement in invasive and non-invasive cardiology that has made tremendous impact.

‘KIMS Heart Care’ is the specialized centre that deals with diagnosis and treatment of congenital heart defects, coronary artery disease, heart failure, valvular heart disease, and electro-physiologic abnormalities. KIMS Heart Care has an experienced team of cardiologists and has emerged as the centre of excellence in cardiology.

A Striking Case in Cardiology

Cardiologists of KIMS Trivandrum performed the first TAVI (Transcatheter Aortic Valve Implantation) procedure among private hospitals in South Kerala. The procedure was done on an 80 years old female from Southern Tamil Nadu. The patient was diagnosed with severe ‘Aortic Valve Stenosis’ with large deposit of calcium, due to which the blood flow through the aortic valve was reduced or blocked thereby, disrupting the blood flow to the body. The patient had high Blood Pressure and had previous history of Breast Cancer for which Chemotherapy had been done. Frequent fainting was also reported for the patient.

Usually, valve replacement requires an open heart procedure with a “Sternotomy”, in which the chest is surgically separated (opened) for the procedure. The TAVI procedure can be done through small tubes placed in the leg, thereby avoiding a chest scar. It is a minimally invasive surgical procedure that repairs the valve without removing the old, damaged valve. Instead, it wedges a replacement valve into the aortic valve’s place. The surgery may be called a Valve-within-valve.

The operating risk was high and challenging taking into the factors; the patients’ age, malignancies due to radiation therapy, which was done for chest. Also, the preparation stage for the procedure was high. CT Scans were used to calculate exact measurements. The surgery was successfully completed.

“International patients come to India for treatment from accredited facilities and cost effectiveness,” asserts Dr. Sheriff Sahadulla, Chief Executive Officer & Chief Medical Officer of KIMS Healthcare Group. “Medical tourism is a growing sector in India and is projected to grow to US$7 billion to US$8 billion by 2020.” Within India, Kerala has attracted medical tourists due to its super speciality hospitals, alternative treatments like Ayurveda and abundant natural attractions.

Dr. M. I. Sahadulla is the Group Chairman & Managing Director, of KIMS Healthcare Group. If there is one word that captures Dr. Sahadulla’s approach to life and work, it is passion. As he writes in Vital Signs: Reflections on a Life in Medicine and Management, his recently published memoir, “These three fundamental passions — medicine, management and ethics — came together when I co-founded Kerala Institute of Medical Sciences,” he says. And as Founder Chairman and Managing Director of KIMS Healthcare Management, Dr. Sahadulla has strived to ensure that passion is part of the organisation’s DNA.

He is a seasoned clinician and an accomplished healthcare leader with over 40 years of extensive experience as an internist and in healthcare management internationally. Dr. Sahadulla’s earned his MD, from the Fellow of Royal College of Physicians (FRCP), London & Ireland, and MBA, from Hull, UK. He provides highly focused and result oriented leadership to the Group. Having received numerous awards and he was nominated for the Padma Shri Award in 2016. He has received the title of National Ambassador by the Anti-Narcotics Council of India (a branch of UN in India) for their campaign ‘No-drugs Communities’.

Dr. Sheriff Sahadulla, the Chief Executive Officer & Chief Medical Officer, of KIMS; often says that, “As a second-generation healthcare entrepreneur, I have rather large shoes to fill.” But the reality is that he has rather impressive credentials himself, as a physician and also as a healthcare administrator. He is a highly skilled physician with over 20 years of experience in clinical medicine and hospital operations. Before joining KIMS, he was a Regional Medical Director with TeamHealth, a US-based healthcare management company, and also had a stint as Medical Director and President at St Joseph Hospital in New Hampshire in the US.

A Fellow of the Royal College of Physicians of London, Dr. Sheriff is American Board Certified in internal medicine and a Senior Fellow of Hospital Medicine. He obtained his medical degree from Tufts University in Boston, Massachusetts and did his post-graduate training in internal medicine at the University of Michigan in Ann Arbor. Dr. Sheriff is well regarded as a clinician leader earning numerous accolades for his quality and patient centred care. He has also been the recipient of the prestigious ‘TeamHealth Regional Medical Director/Vice President of the year’ award in 2014.

Achievements in the Clinical Space

The Group has always taken pride in registering clinical excellence across its institutions through its care pathways and clinical protocols based on best practices. KIMS Trivandrum performs various complex, high-end procedures including liver and renal transplants, ECMO procedure, interventional radiology, awake craniotomy and minimally invasive cardiac surgery. KIMS Cancer Centre is amongst the leading centers in oncology in Kerala. Over 300 CABG and 875 angioplasty procedures were performed in KIMS’ Hospitals in India last year. The group is renowned for its dedicated transplant center in Trivandrum, with 73 liver and 356 renal transplant surgeries since inception. The Royal Bahrain Hospital is a ‘Centre of Excellence’ in performing Metabolic / Bariatric surgeries.

Below is the list of awards KIMS has recently received:

Going forward, technology will play a big role in the evolution of the healthcare sector globally. Healthcare will be delivered beyond the four walls of institutions thus; it is pertinent for providers to develop patient-centric models which allow more engagement in the overall treatment. It will change the way healthcare is delivered to the patients, be it robotic surgeries, electronic medical records, remote access to patient reports, telemedicine, etc. The integration is happening and healthcare institutions will have to quickly adapt to it.

Speaking of technology integration at the various institutes of KIMS, Dr. Sheriff says, “At KIMS, our patient records are maintained electronically across all institutions. We have also launched a Patient Portal service an APP for RBH.” The KIMS Patient Portal enables patients to view their laboratory and diagnostic results from anywhere in the world and the App. offers multiple functions such as booking appointments, payments, generating tokens, etc. “Both of these services are running successfully and are being replicated to other institutions.” he says.

Extended a Helping Hand to Serve the Underprivileged

KIMS has always been in the forefront of fulfilling its Corporate Social Responsibility (CSR) programme and has continuously addressed social, economic, and healthcare needs of the underprivileged sections of the society in India and in the GCC region. KIMS has also been recognised by Trivandrum Management Association in 2014-15 for “Best Practices in CSR in Kerala”. Below is a glimpse of some of our CSR activities in India and the GCC region:

KIMS is working on spreading its network further in India and the GCC region. The group has planned a variety projects on different scales and is dedicated to increasing its market penetration. In 2018, KIMS acquired the Al Rashidiyah Polyclinic based in Bur Dubai area. Work has also begun on two new projects in Bahrain under the KIMS brand. “We are looking at a mixed bag of projects for India and the GCC region. Since, we already have a market presence in most of the Gulf countries, any expansion will be undertaken to complement our existing services and penetration into new geographical locations,” says Dr. Sheriff.