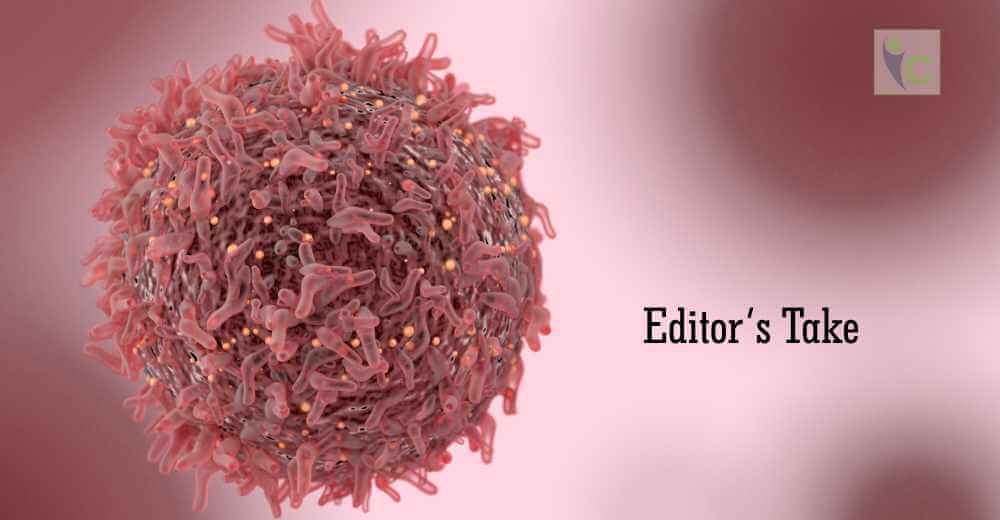 RAS is a gene family that makes proteins which control cell growth and cell death in a human body. KRAS, HRAS and NRAS are the members of RAS gene family. This family produces more than 150 proteins. The RAS gene in its mutated (changed) form can be found in one-third of the cancers. This mutated form of RAS gene produces defective proteins, which causes uncontrolled growth of cells leading to cancer, as well as it makes cancer resistant to the existing therapies.

The most researched gene among the RAS family is KRAS. The mutated form of KRAS gene is capable of transforming healthy cells into tumours. It is majorly associated with aggressive cancers; KRAS mutations occur approximately in 30% of all the cancers. The studies say that 95% of pancreatic cancers, 30% of lung cancers, and about 45% of colon cancers have mutations in KRAS genes and do not have any successful treatments currently. While some cancers originate from mutant KRAS, few cancers even seek this gene continuously to survive. Cancer-causing mutated KRAS genes were identified over three decades ago, and yet no therapy has been very effective against them. A lot of research work is being continuously done in this direction and some effective solutions have come to light.

A thorough study of KRAS structure, signalling and processing has helped in finding several anti-cancer treatments. Various direct and indirect methods, targeting KRAS mutations, are being explored. Inhibition of mutated KRAS genes that will block the growth of cancer cells can be categorized as a direct method. Alternately, synthetic lethality falls under indirect methods to eliminate cancers associated with KRAS mutation.

In the healthy cells, the information travels from the cell boundary to cell nucleus due to the protein made by the genes. The mutated cells produce defective proteins. The signals sent by the proteins determine whether or not the cell growth should take place further or the cell should stop dividing and mature. KRAS acts as a switch that turns “on” and “off”; when on, the cell division continues and when off, the cell division stops. Consider a small molecule, x, which is responsible to turn the switch “on”. In a healthy cell, this x molecule is converted to another molecule, y, which is responsible to turn the switch off. The x molecule in KRAS functioning is GTP and the y molecule is GDP. If the switch does not go to the “off” state the cells will continue to divide uncontrollably, further leading to cancer. Due to KRAS mutation, the switch is stuck at “on” state. This is because the proteins cannot perform x to y conversion. The stated process initiates the cancer formation. Some of the cancers that seek this mutated gene for survival further trigger the excessive uncontrolled growth of cells. Therefore, even if successfully treated, there are high chances of the tumour to be formed again.

Direct Method Using Inhibitors: Researchers have looked for a drug that can turn the stuck at “on” state switch off. But the x molecule forms a very specific bond with the protein. Breaking this bond is very difficult and no proper solution for it has been reached. It was then found that a mutant form of protein, called KRASG12C, can create permanent bonds with the small molecules. These bonded molecules can capture the cell in its inactive state, before it is trapped at the “on” state. This will further stop the growth of cancer cells and cause the shrinking of the tumour.

Certain inhibitors have been discovered for the KRASG12C mutant. These inhibitors have been tested on mice, induced with human cancer. One of them is ARS-853. Inhibitor, GCS-100, has shown the capability of killing the cancer cells addicted to KRAS mutants. A compound named ARS-1620 has also been discovered which is very effective and has to be taken orally. It was tested on a mouse and after some period of regular doses, it resulted in significantly reduced tumour growth. The stated compounds can be used as potential drugs in treating aggressive cancers in the future.

Indirect Method Using Synthetic Lethality: It is found that synthetic lethality can also be used for cancer treatment. Two genes are said to be synthetically lethal if a simultaneous mutation in both leads to the death of both while a mutation in either one does not. Therefore, if the cells associated with cancer are targeted for synthetic lethality, only the cancer cells will die, sparing the normal cells. Synthetic lethality is also possible between genes and molecules. To identify synthetically lethal interaction in particular cells, the screening process is used.

Different compounds leading to synthetic lethality of mutant KRAS have been identified using RNAi screening technology. It has been found that a compound named “TBK1” is very effective with mutant KRAS. This discovery is being considered for clinically treating mutant KRAS associated and addicted cancers. Research and discovery of other synthetically lethal pairs of mutant KRAS can help to develop successful treatments for the pancreatic and lung cancers.

Mutation in KRAS genes is majorly found in various aggressive cancers, like pancreatic cancer, colon cancer, and lung cancer. For a long time, no effective treatments have been found against these cancers. Direct and indirect methods are being studied and developed to fight them. Inhibitors, used to block the abnormal cell growth due to mutated KRAS genes, and synthetic lethality, used to destroy the mutant KRAS, are the two technologies that have shown great potential to help in creating anti-cancer drugs. Study and implementation of these technologies and discovering better inhibitors and compounds will further lead in finding the effective cancer treatments and help to save many lives.