Myths about Caffeine: The Roast Theory 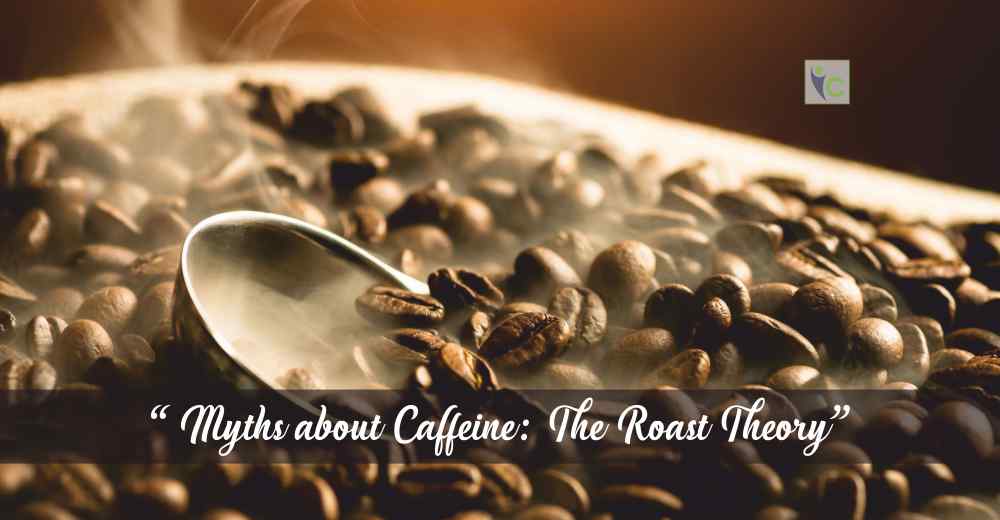 Have you ever heard of light, medium, and dark roast in coffee? Do you think the amount of caffeine in coffee depends on its roast? Well, if you have been wondering, the answer is yes. The repercussions of coffee are quite personal: Jitters, restlessness, nausea, increased alertness, and many more. Even then, for coffee lovers, the feeling of having that warm cup in their hands or even the smell of a freshly brewed coffee is beyond amazing. With so much affection for coffee in our hearts, it’s definitely difficult to give up on it. But, what if you are told caffeine intake can be altered based on different roasts?

The coffee beans, extracted from a coffee plant, are green in color. These smell like grass, are soft and spongy to bite, and flavorless. So how does something so tasteless turn into something so delicious? The answer is ‘Roasting’. First, the beans undergo coffee processing. Followed by that, these beans are roasted to transform their physical as well as chemical properties, to bring in the characteristic flavor of coffee. This process is followed by coffee brewing. There are various levels of roasting, but they are broadly characterized into three: light, medium, and dark.

Light roasts, sometimes also called as Cinnamon roast, Light City, Half City, or New England, are light brown, tan in color, and they lack oils on their surfaces. This is because they are not roasted long enough and hence, the coffee oils don’t break through the beans’ surface. They are the most acidic of all the beans and retain the most of the original coffee characteristics.

Medium roasts, also known as Breakfast, American- as they are mostly preferred in the US, City, or Regular roasts, are a shade darker brown than the light roasts and look richer. They also have a non-oily surface, but some of them are covered in small amount of oil- they are called as medium-dark roasts or Full City. The medium roasted beans start developing aromas and flavors while losing some of their original qualities. They have less acidity and fuller body.

Last of these are the dark roasted beans. They go by the name Continental, Italian, French, European, New-Orleans, Viennese, or Spanish roast. These names are due to the fact that dark roast coffee is mostly preferred in Europe. Also, most of the espresso roasts are dark roast. They are dark brown, some almost black, in color, usually resembling chocolate. At this point, oils are clearly visible on the beans. The taste, aroma, and flavors in these roasts are enhanced and the brightness is replaced with the body. Most of the qualities of the original coffee are lost in these.

When back home after a long stressful day, we want to settle down and have the strongest coffee available. So we go for the dark roasted coffee, mistaking it to be the strongest. The truth, however, is that light roasted beans are stronger then the dark roasted ones. This attributes to the fact that the light colored beans are denser as well, so each of them has slightly more caffeine. So, if considered by volume, the light roast contains more caffeine than the dark one. This happens as during roasting them further to produce the dark roast, the beans usually get burned or over-roasted. These burnt beans lose some of the caffeine content and flavor present in the original coffee. This difference only exists when we consider amount of caffeine relative to the size of the bean. Other than that, 50g of light coffee will have the same caffeine content as that in 50g of dark coffee.

Now, when taken by scoop, we do not add coffee powder to our drink by weight, i.e. the density of the bean is not in the consideration. The myth is born here. Say, if one scoop of light coffee may have around 50g of caffeine, one scoop of the dark one will have 45.

Why is it that the people think dark roast has more amount of caffeine? This is because the intense flavor that dark roast coffee has. It has bitterer and stronger coffee than the light roast. While, we mistake its intense taste to mean that it has more caffeine, the truth is actually the opposite!

There is no such thing as the right roast. But to summarize the roasts in brief, the coffee loses its original taste as the roasts get darker while the flavors produced in it due to the roasting enhances. The oils are visible on the surface after a certain temperature; the surface of dark roasted beans having most of the coffee oils. With roasting, the acidity of coffee reduces. And lastly, the caffeine content decreases as the roasts get darker. It depends on one, what type to choose.