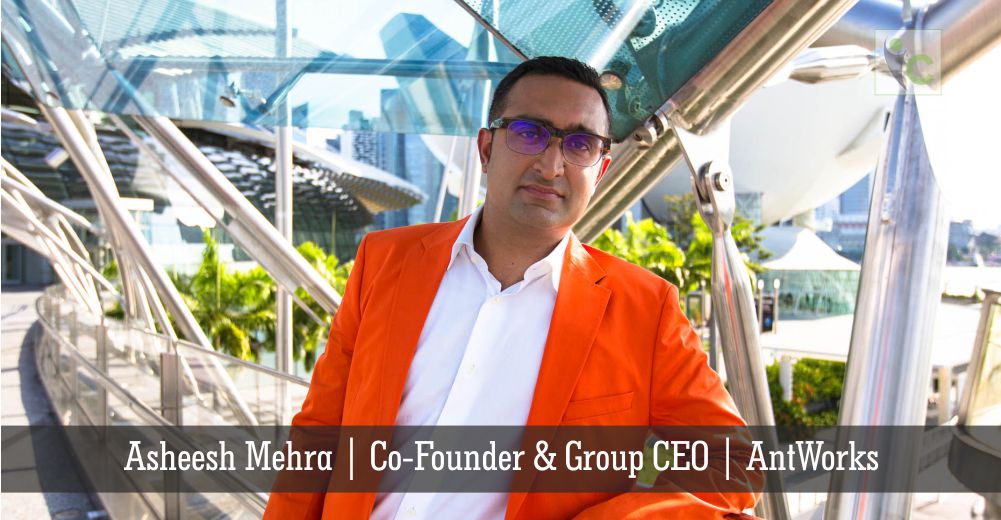 An exceptional leader always showcases the kind of behavior that they would like to see their organization demonstrate. Such leaders care for their employees and ensure that they are successful.

One such fearless leader marching ahead confidently on the road to success is Asheesh Mehra the Co-Founder and Group CEO of AntWorks Pte. Ltd. He says, “My career has been one no different to the silhouette of the Himalayas: The highs were really high and the lows were really low”. Asheesh has learned from every high and even more from every low of his career. He has always been a risk taker and has looked danger in the eyes. He adds that a grit, persistent, and never give up attitude has helped him get to where he is today.

Asheesh is an ardent believer in being independent. One thing that has motivated Asheesh  is freedom – freedom from being a slave to the laptop, conference calls, board meetings, and the smartphone.

AntWorks is a global, artificial intelligence company, creating new possibilities with data through automation, digitization, and enterprise intelligence. They provide the only integrated intelligent automation enterprise level product that is powered by Fractal Science. With the world’s only platform that understands every data type, they digitize every bit of information for a diverse range of industries. By creating human-like bots in a code-free environment, they innovate new ways to automate complex processes. AntWorks’ solutions power up enterprises with accurate insights through an integrated, intelligent, technology stack that automates and learns independently.

Asheesh states that the most daring challenge that he has taken till date was when he walked away from a safe professional career at Infosys and decided to set up AntWorks. The risk was tremendous as he was treading into unknown territory and putting his three meals at risk.

Asheesh’s Perspective about the Industry

“We are ushering in the age of cognitive automation”, says Asheesh.  He feels that while most automation companies are adding intelligence to solutions post RPA implementation, their platform applies cutting-edge cognitive technologies like machine learning and natural language processing ahead of RPA. This results in smooth, seamless automation with high levels of accuracy.

Asheesh believes that the future will belong to point solutions. “We are seeing customers from the typical banking and insurance industries, but what we are observing more than ever is the interest by the heavily regulated industries in this technology”, he adds. About RPA, he says that it is non-invasive, sits outside core systems, and helps customers maintain audit trails – a necessity for these industries.

AntWorks has achieved many landmarks under the ardent leadership of Asheesh. Recently, the company received Series A funding of $15 million from the Japanese financial services giant SBI Holdings. That has wholeheartedly endorsed the company’s value proposition in the Intelligent Automation space. “My team and I have worked very, very hard to see this day” asserts Asheesh.

Additionally, the company has been recognized by all of the notable industry analysts in the industry including HFS Research, Gartner, Forrester, and Everest.

In addition to all of the above, being awarded “Technology Disruptor of the Year” in 2017 by IDS was an important milestone for the company.

Asheesh says that being able to disrupt and become a credible player in the healthcare, automation and artificial intelligence marketplace in just a few short 25 months is a huge accomplishment for him. He also says, “It is something all Ants in the AntWorks colony should to be proud of as it wouldn’t have been possible without the cohesive hard work and dedication”.