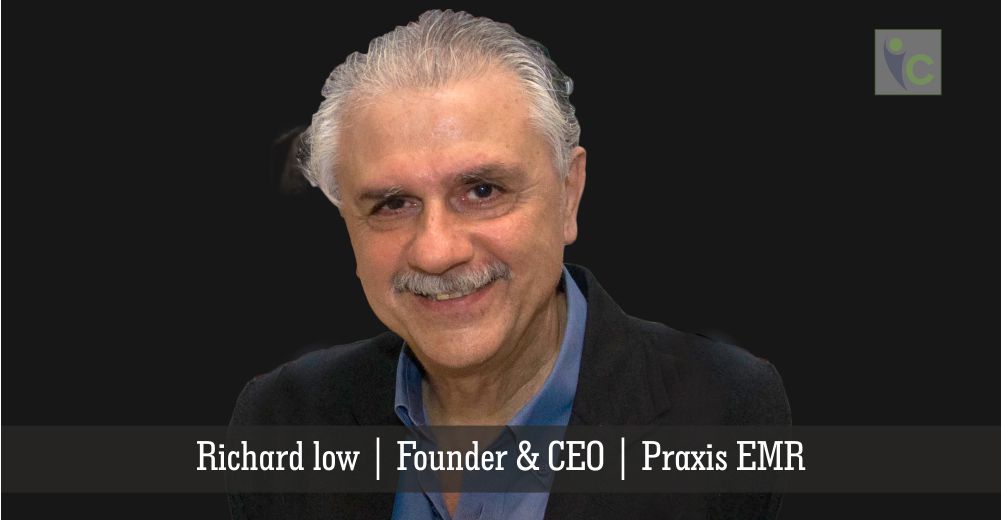 A great leader must inspire others and should have the ability to communicate their vision to others, and persuade others to accept his or her proposed path to the vision as their own. They must be trustworthy, so that everyone will wish to invest the time, money, and effort to work along the path pointed to by the leader.

One such leader with an indomitable will, who never quits at the face of adversity, is Richard Low, the Founder and CEO of Praxis EMR. He considers himself as a medical entrepreneur and believes that a leader is a person of vision. Richard feels that leaders have the ability to foresee a future reward and plan a performance path to reach it.

Richard was passionate about biological sciences and was captivated by the way nature worked, and why it worked the way it did. This early sense of wonder was his gateway into the vast world of medicine. During his time at UCLA, Richard was supported and greatly influenced by two phenomenal teachers, Professor Willard Libby of the Chemistry Department and Professor Robert Wohl, Chair of the Department of History.

Maintaining a healthy skepticism regarding science, he attended Yale Medical School, quickly coming to the conclusion that scientific research was not for him and neither was the practice of medicine. Thus, he began to look at other options. He stopped his training in surgery and then moved on to practice Emergency Medicine, where he noted that he had some business acumen running emergency departments in California as Director of his own Emergency Medicine Medical Group. Although he achieved some financial success early, his heart was not in making money, so he returned to UC Santa Cruz to pursue a degree in Philosophy.

When Richard came into contact with his first computer in 1988, he immediately decided to merge new technology of computers with his chosen field of medicine. He realized that computers were meant to change medicine dramatically.

Eventually, he met a group of brilliant programmers in Buenos Aires with whom he began sketching the outlines of a project that would allow a computer to empower a doctor in the practice of medicine by learning from the same clinician. The Praxis Concept Processor has been the result of this work and a permanent search for excellence. He has since seen his role as that of a translator between the world of physicians and the world of programmers.

Richard says, “More than 20 years ago we learned that Argentina had amazingly bright IT professionals working at relative low cost, something that is no longer the case today”.

Thus, under the ardent leadership of Richard, Praxis EMR was able to self-finance the initial development of this unique technology without employing a dime in venture capital. The company has always grown by sales and not by investments, for they have always looked at the long range goals rather than immediate profits. However, moving a high tech company to South America twenty years ago, before India’s boom, was perceived by many to be an insane undertaking. It proved their saving grace as it allowed Richard to make every business mistake in the book and then some and still do well.

Under Richard’s leadership, Praxis has developed a unique type of electronic healthcare record (EHR) that empowers providers to chart dramatically faster than dictation. More importantly, this technology known as the Concept Processor helps physicians practice better medicine easier by becoming an extension of the provider’s mind. It is a powerful medical tool, and not just an EMR.

Throughout his illustrious career, Richard has achieved many remarkable milestones. Richard-led Praxis has developed the only system that works effectively for physician charting and they plan to grow exponentially over the course of the next five years. He said that the most memorable moment of his life was when he realized that Praxis was not just a fancy theory but that actually it worked as intended, and a bit later when their first clients raved about it and fell in love with their technology.

Views about the EHR Industry

Richard feels that the EHR industry is in chaos because the people who develop these applications are clueless about what they are doing. “The vast majority have never practiced medicine so they learn from doctors what doctors tell them. And doctors do not really understand what is it that they do and rely on what they think they do, which is a completely different story.” asserts Richard. He adds that the competing EHR applications have been detrimental to the practice of medicine, wasting much time, money, and causing clinical errors and professional stress.

Richard says that many believe computers should not be a part of medicine, but they are incorrect. He further adds “Computers are not at fault. A computer can be no better than the way it has been programmed, and our competition has made our job much easier”.